We’ve all been there. You have A BIG IDEA, a solution you think has the potential to solve a real world problem - and just maybe could turn into a multi-million dollar venture! We’ve all had big ideas and big dreams. But what do you do when you want to turn the idea into reality?

In the Spring semester of 2017, Motivote, an NYU Wagner student-led startup, had their big idea to address the problem of voter turnout: “80% of young voters stayed home for the last midterms. We wanted to fix that.” The team had been working on their idea as part of their NYU Wagner Capstone program and had entered the $300K Entrepreneurs challenge, but they knew they needed even more guidance. “Knowing how to start wasn’t obvious…”  noted Rachel Knowitz, Co-Founder and COO of Motivote (Wagner ‘18).

That’s why we’re here to help. At the NYU Entrepreneurial Institute we’ve helped launch hundreds of NYU student, faculty and researcher-led startups. Motivote, first came to the Institute’s coworking space for NYU startups, the Leslie eLab, in Fall ‘17. They began meeting with a coach at the Institute, and since then the team has participated in each of the programs in the Institute’s Startup Accelerator series, gaining more and more support from NYU in the form of community, grants, training, coaching, mentors, a place to work, and a network in the NYC startup ecosystem.

When Motivote applied, and was selected into the first annual J-Term Startup Sprint, a 10-day accelerator designed to help NYU teams get to problem-solution fit, it was “a massive wakeup call.” According to Jess Riegel, Co-Founder & CEO at Motivote: “the sprint lit a fire for how fast we had to move. We did over 100 interviews during two weeks of the sprint. This became more than just a cool idea of a tool that should be used for elections. We finally started to think of Motivote as a business.”

Following the sprint, Motivote was invited to participate in the peer-based mentoring cohort, the NYU Ignite Fellowship, and kicked off a series of experiments during the 2018 U.S. primary election season. Some of their experiments were huge successes, and others were failures but great learning lessons. Motivote didn’t make it through to the final round of the $300K challenge, but as Rachel put it, “when we didn’t get through to the final round of 300K, I thought, I believe in this venture.” And through the Spring ‘18 semester they worked with their Ignite Fellowship peers and coaches to strengthen their understanding of their customer’s needs and refine their business model.

After being accepted into the NYU Summer Launchpad, our 9 week long accelerator to help teams gain market traction, Motivote made the decision to do this full time. “At first we thought let’s do this for the summer and see where we are. And at a certain point it just turned into something real,” noted Rachel. With the help of the Launchpad, today Motivote has raised funding, is generating revenue, running pilots across the country, and has added four members to their team. They’re gearing up for the November midterm elections, where they hope to have 10,000 active users on their platform.

Throughout Motivote’s journey they were supported through a series of programs at the NYU Entrepreneurial Institute, from the Startup Sprint to the Ignite Fellowship and NYU Summer Launchpad. This series of programs, together with our newest program, the Startup Bootcamps for customer discovery and prototyping, form the core of the Institute’s accelerator program offerings (see image for details). Today Motivote, like other teams who have participated in these programs, is continuing to get support from the Institute as they grow. 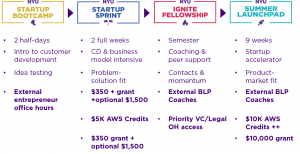 When I recently asked Motivote what they wish they had done differently, the team said: “We wish we had started coming to Leslie eLab earlier. We wish had known to start talking to customers and testing early on. We needed help thinking outside the box about what to test - it’s not just about building and testing the app - its about testing the principles and the value behind the app - for that you don’t need the app to test.”

Since 2010, the Institute has invested in 18 companies from 9 NYU schools through the NYU Innovation Venture Fund, such as Brooklinen and Kinvolved. Including Brooklinen and Kinvolved, we’ve had 56 companies participate in the NYU Summer Launchpad accelerator, and program alumni companies earned over $60 Million in revenue just last year. In 2018 alone we had 42 teams go through our Startup Sprints, and since launching the Startup Bootcamp program in Spring ‘18, have helped dozens more hopeful startup founders.

We want to help you take your BIG IDEA and turn it into something real, through the core NYU Entrepreneurial Institute programs. You can get started today by scheduling a coaching appointment, or applying to a Startup Bootcamp. We look forward to meeting you.