On February 17th 2018, the NYU Entrepreneurial Institute and the Stern Private Equity & Venture Capital Club sent our team of Stern MBA students to compete in the Venture Capital Investment Competition (VCIC) at the Yale School of Management. VCIC is the world’s largest venture capital competition with over 70 universities competing around the world.

Our team consisted of: 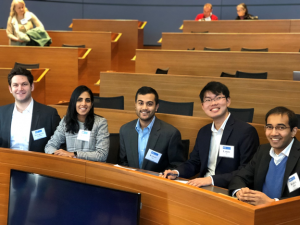 (Left to Right) Ugercan, Supriya, VInay, Larry, and Rahul await to present their analysis of the startups to the panel of VCs.

During the competition, the six competing teams analyzed two local startups that were attempting to raise money, conducted due diligence on the companies and their markets, created a term sheet to offer the company they liked the most, and then negotiated with the CEO of the startup to finalize the prospective term sheet while active VCs judged their progress throughout the competition. The judges were representatives from Launch Capital, Bulldog Innovation Group, Connecticut Innovations, HealthVenture, and 1843 Capital.

The startups that we analyzed were SpotOn and Modiphit.

Our team performed well and was one of the favorite VC teams from the startup perspective. We asked in-depth questions, proposed fair terms to our founders,  and challenged them to go all in on their ventures. However, it was a highly competitive field of teams, including teams from Cornell, Harvard, BU, Johns Hopkins, and Columbia, and everyone came fully prepared and brought their A game. It was NYU’s first time back in the competition and it took us some time to get the swing of how the judges were grading our term sheets and interactions with founders.

In the end, a team from Boston University won the competition, so big congratulations to them! With this experience, we believe we will be much better prepared for next year!

We look forward to competing again next year and potentially hosting a VCIC regional round at NYU Stern. 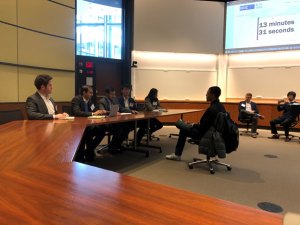 (Left to right) Ugurcan, Rahul, Vinay, Larry, and Supriya negotiating with the founder from modiphit regarding his machine learning fitness app.