This piece was originally published on the CASEA blog here. 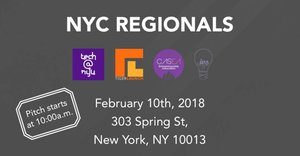 The regional TigerLaunch competition in NYC was a refreshing way for burgeoning entrepreneurs to start February. February, a bold month that commemorates the birthdays of America’s presidents and Black history, the competition's fourteen northeastern teams truly embodied our past with a vision of the future. Despite a slow, slightly chaotic start, the event gained momentum throughout the day, especially with Amit Mukherjee leading the morning’s fireside chat. Serving as a judge for the competition as well, Mr. Mukherjee, a partner at New Enterprise Associates focused on consumer technology investments, reflecting on his own experiences in entrepreneurship. Highlighting the importance of entrepreneurship and the power of relentless persistence, Mr. Mukherjee advised aspiring entrepreneurs to “go for it." He added, "if you have an idea right now, you can do it. It’s okay to fail, to make mistakes, as it’ll be a great learning experience.”

The morning’s fireside chat empowered teams and exposed the themes for the competition—grit and vision. The competition began promptly at 10am with Prana.AI, whose exuberant presentation and intense entrepreneurial endeavor wowed the audience. There were some very ambitious startup ideas, including revolutionizing medical scan analysis that allow users to view a heat map of points of interest, or highlight abnormalities in order to enhance decision-making; drone technology to measure the health of citrus trees; and a robust strategy for cryptocurrency trading, to name a few. With seven teams in the first round, the tight competition left competitors famished for lunch. 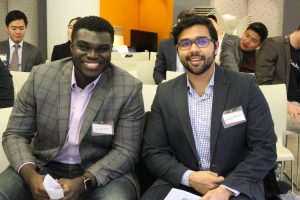 During lunch, teams socialized with the audience, the judges, and with other teams. The great space at Galvanize gave teams the opportunity to lounge, practice their pitches, and play ping-pong and cornhole.  The supportive staff at Galvanize as well as great food led to a successful and refreshingly amicable way to begin round two.

Round two began with a team of female founders from FoodPeriod, which offers an all-natural supplement to regulate menstrual cycles. A seemingly great team with grit, knowledge, and passion for a transformative way to manage women’s health impressed and inspired judges. Nevertheless, Pepper (the other female-led team), Street Smart VR, Cygena, GiftAMeal, Tendo Technologies, Penta Group, and EndoQuant also embodied the meaning of entrepreneurship and had charmed the hearts of the judges as they explored ways to foster a better environment and a better world.

Deliberation had been a difficult and tedious process. When offering their feedback, the judges were fair and to the point. Student judges with impressive backgrounds in entrepreneurship included Alana Anderson (Columbia), Jack DeFuria (NYU), Doc Parghi (a venture capitalist), Udit Jain-Makoua (a partner with Dorm Room Fund), and Amit Mukherjee. At the end of deliberation, the finalists were chosen! FoodPeriod (NYU), Prana.AI (Columbia), Pixelcode (Cornell), Street Smarts VR (Princeton), and BlockChat (Princeton) all received congratulations at the end of the event and are expected to attend the final event at Princeton in early April.

Learn more about each of the finalists: