Why Your Initial Hypotheses Are Wrong and How to Adapt

Somewhere in Steve Blank’s basement resides a whirring server with tens of thousands of incorrect hypotheses. They were once the twinkle in an aspiring entrepreneur’s eye, and now they lie in a digital graveyard with all of the other invalidated value propositions that have been laid to rest. Yet a good entrepreneur might look at this morbid scene and call it progress. 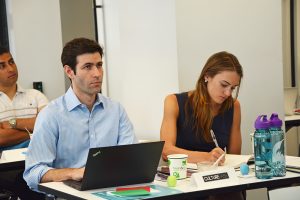 Blank is one of the godfathers of modern entrepreneurship, and a pioneer of the Lean Startup movement that has swept the entrepreneurial landscape from Silicon Valley to Silicon Alley. His teachings are the basis for building businesses from the ground up and innovating mature companies, and they play an integral role in the curriculum of the NYU Summer Launchpad, a 10-week accelerator program that we are grateful to be a part of. The core of it: form hypotheses surrounding your target customers’ needs and your proposed value, and validate or invalidate them as quickly and cheaply as possible.

If you are thinking to yourself that this sounds familiar, you’re probably right. The methodology is, at least in principle, the same as the Scientific Method, taught in eighth grade science classes everywhere. 1) Form a hypothesis. 2) Design an experiment to test the hypothesis. 3) Analyze the results. 4) Draw a conclusion--validate, invalidate, continue testing. This same framework is also fiercely effective for customer discovery for a new venture. Here are some tips to keep in mind while exercising this approach:

Don’t be married to your hypotheses...

Chances are your business idea is based on a problem that you personally experienced, or one that you encountered while interacting in the field you wish to disrupt. The pain you witnessed was real, and likely not unique. Let that hunch be the basis of your initial hypotheses surrounding the value that you can provide and the customer segment you can provide it to, and test it. But most importantly, be flexible and open to change.

If you’re doing it right, you’ll likely be wrong… 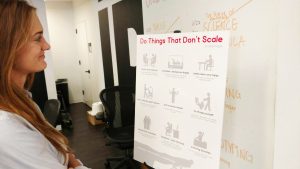 Blank has been tracking the results of entrepreneurs’ hypotheses for several years, and it is reported that 60% of initial hypotheses are invalidated. The first lesson every entrepreneur learns: you will be wrong! At least about one of your hypotheses, and likely many more.  That’s ok! Embrace it, learn from it, and press on.

Early on, we formed a hypothesis that cost was the foremost barrier for our initial customer segment. It turned out to be flat out wrong, invalidated by dozens of interviews. The game then becomes a matter of tweaking the value hypothesis or the customer segment and obsessively iterating on this discovery process until it clicks.

Be close enough to see their pupils dilate...

Humans are expressive creatures, and seeing the pain written on their faces can be far more telling than words transcribed in an email or spoken on a phone call. The biggest part of our customer discovery process has been face-to-face interviews with our initial target customer segments, leading us to realize that a few of the pains we developed our concept around just weren’t very sharp. It’s far better to know this sooner than later, so get out of the building and sit down with some humans.

Be your customer’s psychologist…

Finding your beachhead customer is about listening for the pain. This isn’t the person with the broadest set of pains, but rather the deepest pain. Ask open-ended questions that make your interviewee recount specific experiences rather than guessing at how they might react. You’ll recognize your beachhead customer when they release an audible gasp as they recount a painful experience in the area you’re probing. The ones who suffer the deepest are often the ones who are the most excited about a solution. Your first customers are ideally the ones you can make evangelists out of, so ask them to refer you to their friends who share similar backgrounds and experiences. However, keep in mind that the person who suffers the most may not necessarily be the ones who make the purchasing decisions.

Avoid the trough of despair…

Just kidding! There’s no avoiding the trough of despair. At some point in every entrepreneur’s journey he or she will hit rock bottom, but the best ones stay positive and focus on the rebound. It’s important to stay flexible and remember that your vision is not your technology, your product, or your business model. Once you have reminded yourself of that, go back to the drawing board and rise from the ashes with a new set of informed hypotheses.

A couple of weeks into SLP we found ourselves in the notorious trough. We’d conducted 50+ customer interviews and invalidated hypothesis after hypothesis before finally accepting that our target customer segment simply wasn’t experiencing severe enough pain in the areas we proposed. So here’s what we did: bought a six-pack of beer, ordered Chinese food and locked ourselves in a room for the weekend. We poured through customer interview notes, extracted insights, and identified patterns. To organize our thinking we covered a life-size business model canvas with hundreds of colorful post-it notes and created buckets of themes. Eventually, we emerged with a new set of hypotheses for some new (and some not-so-new) customer segments. A drastic but necessary pivot.

As we move into the last weeks of SLP, interviews continue, as customer discovery never stops. Constantly testing new hypotheses is a hallmark of innovation. Sometimes that means you end up in Steve Blank’s basement, but it turns out that’s not such a bad place to be.

Authors: Victoria Michelotti and Aaron Marks are the co-founders of CulturePass, a startup that is empowering people to be more engaged in the arts by simplifying discovery and access to performances, exhibitions, concerts, and more.

Victoria has eight years of marketing and public relations experience in the arts and culture sector. Most recently she managed global communications for Sotheby’s Institute of Art.  Victoria received her B.A. in English Literature from Dartmouth College and an MBA from the Stern School of Business at NYU.

Aaron spent three years at Goldman Sachs in their Structured Products group before leaving to establish his consultancy, 10 Seeds, through which he helps advise startups, creative projects and nonprofit organizations based in New York City. He holds degrees in Applied Mathematics and Economics from the Johns Hopkins University with a focus in Entrepreneurship and Management.
This post is part of the NYU Summer Launchpad blog series featuring NYU entrepreneurs’ first-hand accounts of challenges faced in starting a business and the lessons learned along the way. Learn more about the NYU Summer Launchpad 2016 participants here.
5 Most Popular