On the day of the inaugural graduating class of the Academy for Software Engineering in NYC, a separate collection of senior technology executives and computer science faculty from a dozen NY area universities came together to discuss the future of higher education computer science curricula.

The events held only a few blocks apart on June 27th, enabled venture capitalist and co-founder of AFSE, Fred Wilson to address both the commencement audience and this gathering of industry experts and academics.  Given Fred’s efforts to expand K-12 computer science education, it was only fitting for him to be in both places on the same day.  The juxtaposition of the of the two unrelated yet related events was not lost on those in attendance. Several attendees have also been mentors to some of the newly minted graduates.

As the next generation of computer science graduates set out to pursue their interests at the next level, it’s imperative the educational challenges of this fast paced profession be tackled as a joint collaboration between practitioners and educators.  The explicit objective for the Future of CS workshop was to stimulate a meaningful dialog and uncover actionable ideas.  The discussion among the attendees was thoughtful, engaging, and enthusiastic.

The main theme of the event focused on striking the balance of preparing students for the 'last mile' before entering the work force. 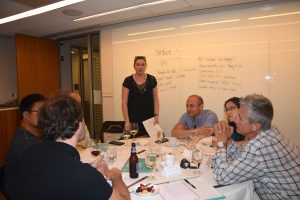 Some of the questions posed and debated included: with more emphasis on CS in K-12 education, how do university CS curriculums adapt to the students entering their programs with better foundations coming in? Are there particular types of practical and theoretical skills that need strengthening? How can soft skills like teamwork and communication be better integrated into CS curricula so that students are more productive from day one on the job? Is the current degree structure (BS, MS, PhD) sufficient? Should there be something between an MS and the PhD?

Why now and who is initiating this conversation?

The workshop brought together a diverse groups of computer science faculty, represented by a number of schools including NYU, Cornell, Pace University, Hunter College, Montclair State University, Rutgers, Brown, NJ Institute of Technology and the College of NJ.  Industry representation was organized by the NY CTO Club, and the attendees were from a range of industries including finance, transportation, advertising, technology, and companies such as Uber, Oscar, Google, EverPlans, and several startups. 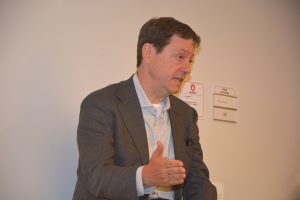 The workshop was the result of discussions between the NYU Entrepreneurial Institute and NYU Tandon School of Engineering on ways of increasing practical relevancy in the classroom led by Nasir Memon, Chair of the CS Department at Tandon and Andy Moss, Entrepreneur-in-Residence and  Director of the Blackstone LaunchPad at NYU and facilitated by Rahul Simha, professor of Computer Science at George Washington University.

What are the key takeaways from the discussion?

In his opening remarks, Fred Wilson reiterated the importance of the primary topics of discussion, and asked the group to consider a few important challenges facing society as technology increasingly impacts our daily lives. Diversity, communications, and ethics, while not computer science specific, have a growing importance within the profession. People building software and systems should consciously consider the context and societal implications of how their creations will be used.

All attendees agreed on the significance and need to improve diversity. With the breadth and reach of tech around the world, making sure the people who build it reflect global populations is hugely important. This workshop served as an opportunity to further stimulate awareness that tech professionals are more often than not building products/services for people unlike themselves.

There was general consensus on the need to continue teaching fundamentals of computer science such as algorithms while also of immediate impact including more real world types of experiences such as the use of more open source and GitHub within class projects. 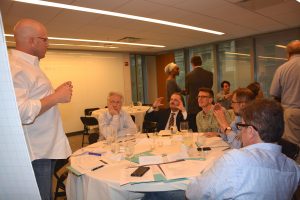 A wide array of longer term changes was also deliberated, such as shrinking core requirements.  It may be time to rethink what’s in the core versus taught in related but separate specializations.  The broad definition has expanded the core requirements to the point where there is little room for student exploration of electives in specialized areas.

Experiential learning was another theme that emerged in the workshop in a variety of ways.  Utilizing real world tools and open source code with class projects are simple examples, while integrating internships into the curriculum rather than as extracurricular activities would be an incredibly valuable experiential learning opportunity.  The Waterloo University approach was highlighted as a model.

Communications and collaboration were stressed as critical for CS professionals, as anyone else, particularly in the context of the ethical and moral implications of their work.  They need to be comfortable and confident raising issues, developing thoughtful arguments in support of their positions through constructive debate, listening and actually hearing other perspectives so the products that emerge are as representative as possible of quality well considered ideas and perspectives.

Planning has already begun for the next meeting some time during the Fall semester. Stay tuned.

About the author: Andy is the Entrepreneur-in-Residence at the Entrepreneurial Institute, and Director of the Blackstone LaunchPad at NYU. He founded Lean Launch Ventures, a tech accelerator, invested, advised and trained other entrepreneurs, has founded and sold a technology startup, and is a member of the New York CTO club. Previously, he spent 17 years at Microsoft where he launched/managed several businesses.