Michael Lebowitz is the Founder and CEO of Big Spaceship, a digital advertising agency. He is a frequent Lecturer at NYU Stern Business School.

Please give a brief description of yourself and company.

I’m a father of two boys, 9 and 6. I started Big Spaceship way back in 2000, which in digital years is a really long time ago. We’ve gone through multiple epic disruptions along the way. I was a film major at Vassar College, but there was no school for what we do at our company. When I started it, we were just figuring it all out.

What is Big Spaceship and how does it work?

Big Spaceship is an anomalous entity, although we are an agency and we live in a world with a sea of agencies, we’re a bit different. We are an agency that provides a full suite of services relating to a world that has become completely connected and digital. Strategy, data analytics, creative development, and the creation of things. We generally help very large companies reach the people they want to reach more successfully and have stronger and more harmonious brands. We also help them adapt to a very transformed world because large companies do that more slowly than small ones, so we become a nimble partner to them.

What is the why behind all of that?

Because it’s better than a straight job. We just wanted to make cool shit. Now it’s a lot more sophisticated but we do it because of the culture. By focusing on culture it allows people to do all of the things they are capable of, rather than just fulfilling a role. The challenges get balanced out by getting to see people enjoy each other’s company, thrive, make amazing things, and all in a genuinely embracing and kind environment.

How would you define culture? 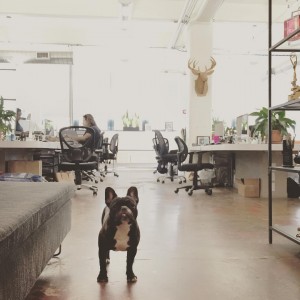 Most companies define culture by the amenities they provide. It’s not about free M&Ms, dry cleaning, or massages at work. Those are nice things but they’re amenities. Those are not solutions and don't begin to define culture. Culture is the rituals that arise out of connections in the company with a very intentional framework around it.

We have 4 core values: take care of each other, collaborate inside and out, speak up, and produce amazing work. Those 4 things nudge the culture in the right direction but also leave a whole lot of room for people to be themselves. I wanted to create a company that has a framework around it but is ultimately a canvas for the people.

We’re not afraid of being weird. I’ve said for a long time that we have to behave professionally but need to avoid “Professionalism” with a capital P at all costs. Professionalism is this thing that asks you to sand off all the interesting aspects of people’s personalities, backgrounds, and interests. I love the fact that one of our technologists grew up working in her parents’ pizza parlor, and one of our strategists was once a professional ballet dancer. What do people do? What’s their side-hustle? What are the things that they are doing when they are not working? That brings about the ideas that we leverage to create success for our clients and ourselves.

What’s one example of how your culture is displayed?

Hackathons are something we’ve done for a long time now. We call it Hack Day. While a lot of companies might only engage their engineering departments in hackathons, and we don’t really have departments here so it’s the whole company. We take the company offline from client work for a 24 hour period of time. There’s a fairly open brief, but open in different ways. It might be “use this technology but do whatever you want with it”.

What was the process of starting your company like? and was it fast or slow?

It feels like it was incredibly fast and slow. It was a wonderful and unique time. It was OK to say “we’ll build something cool and someone will just show up”. That sounds so naive now, but it was actually true then. You have to be much more thoughtful and methodical now. There was the micro-opportunity of we can build all of these things, and the macro-opportunity of people wanting to pay us money. I never wanted to grow too fast, without very strong cultural foundations. One of the hardest things in business is pulling on the reigns. We never took on any investment or had anybody looking over our shoulder. I was not trained in business, so a lot of my training has been falling on my face 10,000 times and trying my best to learn from it. A large portion of success is being in the right place at the right time. We wanted to make really cool stuff at this amazing inflection point. We could then build our maturity in parallel with the industry. Now, I would have no idea how to start a company like this. There was an element of luck.

You mentioned being in the right place, can you describe how being in New York City (also specifically Brooklyn) was unique?

It totally helped. We’ve always been a Brooklyn business. We’ve been in DUMBO for 15 and a half of 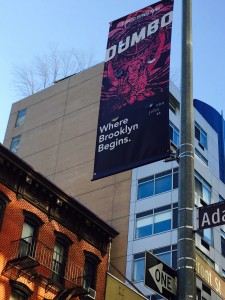 our 16 years. We didn’t have any money so we started in an extra bedroom of an apartment on Smith Street. Then as quickly as possible wandered around and saw signs on the sides of buildings and this neighborhood specifically because it was mostly just artists then.

Brooklyn has become home and very much part of our identity. Now it has become this incredibly significant place but it was pretty rough and tumble then. It really incubated us. The challenges of being here were that most clients had never been to Brooklyn and didn’t want to come here. Now a lot of our clients have spent time in Brooklyn, and the ones that haven’t are excited to come here.

We’ve had people from and outside all five boroughs but as Brooklyn became the center of New York City in a lot of ways, we offered this great benefit to the people that worked here, and now probably 85%+ live in Brooklyn.

I’ve lived in Brooklyn for 20 years. I can’t imagine having done it anywhere else.

How has being a lecturer at NYU brought you insights, and what is special about the university?

I love it. The reason I go and speak there was that Harvard Business School wrote a case-study on us back in early 2009 and it’s taught at Stern. When some of the professors, who were teaching it, reached out I was excited. I went to the business school of hard knocks in a way, and now I’m going to one of the best business schools in the country. It was and continues to be one of my favorite things to do. I want to stand there for as long as possible and get peppered with questions and have to answer them on the fly.

It’s a treat and NYU is a remarkable institution because they allow for that non-traditional format. I’m not lecturing, I’m having a very large conversation. They’ve all been incredibly flexible and welcoming to that. The students regardless of where they are in the development of their career have very flexible minds and are very astute and sharp people. I’ve had fantastic conversations. Ultimately, I think I get just as much or more value out of it as they do.

What are the defining qualities that you had when you first started? and what is some advice you have for would-be entrepreneurs trying to get their business started?

It’s equal parts curiosity, resilience, and passion. It got me through an endless number of challenges, large and small. Some that seemed really large in retrospect seem really small now, and vice-versa. You have an idea , but you don’t always know what’s going to happen. All you can do is stay elastic.

Setting down your values is wildly important. We turn down work because it would compromise our values. Your values aren’t your values until it costs you something. The best thing you can do is know why you are doing it, setting down those values, and putting a system in place that holds you accountable to them. If you don’t write them down, you’re not very accountable to them. That’s the best advice I could possibly give.