This post originally appeared on the MakerSpace blog here. 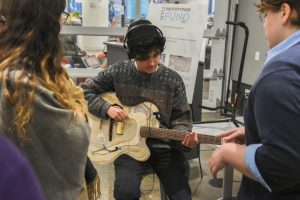 On December 6, 2019, the MakerSpace event space was bustling with students, faculty and outside visitors coming to see the prototypes developed by awardees of the Fall 2019 Prototyping Fund. 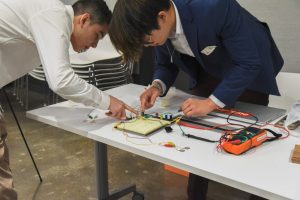 THE WALKWAY TEAM SETTING UP

Since 2013, the NYU Prototyping Fund (a collaborative program offered by the Design Lab @ NYU Tandon MakerSpace and the NYU Entrepreneurial Institute) has awarded teams of students up to $500 for phase 1 to  build hardware or software prototypes, and connects them with the resources, tools, and mentors they need to bring their ideas to life. Past awardees have gone on to win the $300k Entrepreneurs Challenge and InnoVention Competitions, receive grants from NYU Green Grant, VentureWell and the NSF, raise angel/venture capital funding and several remain in business shipping products and generating revenue! 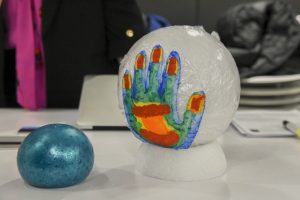 This fall 9 teams of students (undergraduate, master and Ph.D. students) representing multiple schools at NYU shared  projects that ranged from designing a device to measure nutritional health or to reduce stress for patients with disabilities to a sensor-based walkay to generate electricity or a smart guitar. (see list below). 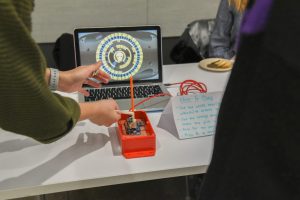 We encouraged participants to think of prototypes as “questions embodied” and to think of the Prototyping Fund as a space to experiment, test their ideas (with users!), and to iterate; and they all walked the talk. In contrast to other innovation and entrepreneurship programs that tend to be more competitive, the Prototyping Fund is at its core about learning and collaboration. It was therefore inspiring to hear one student (Fuerza team) explain how during our mid-point workshop (where participants come to share their progress and provide each other feedback) she was inspired by another team’s idea and decided to explore a completely different form for her device. As for the Walkway team, they told us how they had approached the FerraFlow team to see if they could partner: “we produce energy and they created a battery to store energy and we need to figure out how to store the energy we produced.” 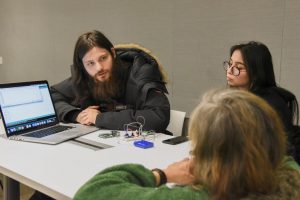 Last, the PowerBox team explained how the feedback they got from the workshop lead them to do more research to figure out who were the most relevant users for their product. Tourists had been an option that emerged from the discussion during the mid-point workshop and they validated the idea during the rest of the semester while creating their working prototype. “Participating in the Prototyping Fund forced us to think about who are our users and what is our value proposition. I am not sure if we will continue this project but we will definitely use it for other projects, in particular a startup project I have.” said one of the team members. 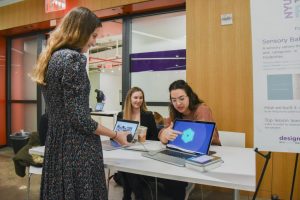 It was inspiring to see the impact of collaboration, feedback and knowledge sharing… and we are confident that the teams received useful feedback from attendees as they interacted throughout the event. 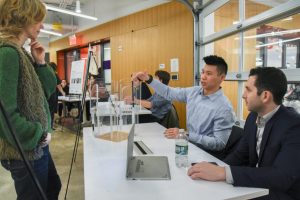 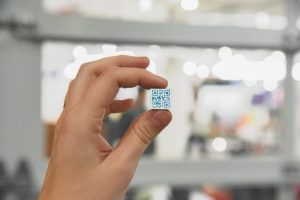 ONE OF AM SECURITY PROTOTYPES 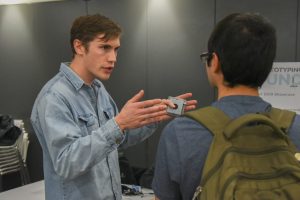 Rethinking the Porta Potty: Improving the design of portable toilets (“porta potties”), including through the addition of folding capability, so that the units can be reduced in size for efficient transportation and storage. Nathan Weinstein, Stern MBA ‘20; Michael Lin, Tandon MS ‘20; Anthony Wang, Tandon MS ‘20