The NYU Innovation Venture Fund is proud to announce its 16th investment in Kitsplit, the startup re-imagining the Hollywood production system as a local marketplace. Kitsplit was founded by NYU entrepreneurs, Lisbeth Kaufman (Stern MBA ‘15), Kristina Budelis (Tisch/ITP ‘15), and Ken Amarit (Tisch/ITP ‘15) in 2015 to support the rapidly growing class of content creators. 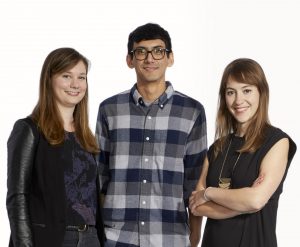 Lisbeth and Kristina met at NYU while consulting for a film startup through their fellowship with inSITE, a program for graduate students interested in entrepreneurship and venture capital. Kristina had previously produced video at the New Yorker and worked as a freelancer for Vogue and others, providing her with an intimate knowledge of the film and production industry. Lisbeth grew up on the film set and worked in consulting and strategy before earning her MBA. The two later brought on Ken Amarit, whom Kristina met at ITP, who has a BFA in film and was previously the VP of Engineering at the marketplace startup, TEEspy.

Through these experiences, the founders gained several unique insights that eventually led to the founding of this venture-backed company. There are more content creators than ever before due to the growth of media distribution on platforms such as YouTube, Vimeo, Facebook, Netflix. Traditional gear rental resources however, are fragmented, old-school, offline, and expensive: unfit for the modern, millennial content creator.  KitSplit is modernizing the rental process, making it easier, faster and more affordable for content creators, freelancers, production companies and pro-amateurs to rent high-quality cameras and gear they need. KitSplit’s local marketplace platform is disrupting this industry by building a fully vetted community of content creators, production companies and rental houses, and enabling them to rent gear and buy instant insurance on-demand. 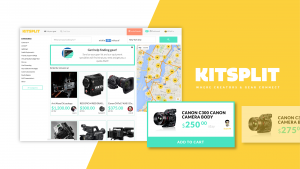 The rise in video consumption across the internet is a trend that has persisted with 80% of all internet traffic expected to be video by 2019, up 64% from 2014. Facebook reported that its users watched a combined 100 million hours of video content per day and 500 million of its users watched Facebook video each day. At over a billion users, YouTube reaches more 18-34-year-olds than any cable network across the United States. As Facebook, YouTube, Vimeo, Hulu, Netflix and others decentralize video distribution, the landscape has shifted from vertical creation and distribution from large media conglomerates (Fox, Disney, etc.) to a horizontal landscape comprised of studio houses, freelancers and pro-amateur filmmakers that can create, distribute and monetize video content without the support of a large studio or budget.

As these industry shifts occur in tandem with the demand for high-quality content, audio and video gear and equipment will be needed by freelancers, pro-amateurs, studios and production houses, but at an affordable price point and readily accessible. This is the gap that Kitsplit fills by bringing a traditionally brick-and-mortar industry online for the first time.

The KitSplit community is currently close to 30,000 content creators and production companies, and their inventory has nearly $200m worth of gear.  Kitsplit has worked with visual content creators across the country, including Vox Media, National Geographic, Hearst, Vice and Refinery29.

KitSplit recently expanded its operations to Los Angeles and is expanding its team!