By 2050, the World Bank estimates that nearly three-quarters of the world’s population will live in cities. Today, 54% of the globe does, and in 2008, that percentage made history as it finally exceeded the halfway point. This meant that for the first time, urban life offered families the promise of more sustainable, self-sufficient living, even growing their own food.

But sustainability for a nuclear family did not and still does not imply sustainability for the planet itself. Inevitably, city-dwelling researchers, who are surrounded by the sociological, economic, political, and energy problems that accompany rapid urbanization, are beginning to explore solutions to these very issues. This is particularly true at NYU, where faculty and researchers are working not only to understand cities more deeply, but also are developing tools and insights that can help cities be more equitable, sustainable, and resilient. With its main New York City campus, and campuses in global cities such as Shanghai, Dubai, and London, NYU offers tremendous opportunity to learn and experiment in this field.

“As a pan-University organization, through our interaction across all the schools and institutes, the Entrepreneurial Institute serves to help identify areas for further collaboration among the many programs focused on these challenges,” says Andy Moss, Entrepreneur-in-Residence and Director of the Blackstone LaunchPad at NYU. “Helping to bring the important research to market is our ultimate objective.”

Mike Holland, the Executive Director of NYU’s Center for Urban Science and Progress (CUSP), explains that developing ways to join traditional record data, increasingly common sensor data, as well as some novel video and other imaging data, can help provide city agencies a comprehensive, interrelated, and interoperable picture of that part of the city they are intended to serve.  “Local governments have very practical problems,” Holland says. “Our goal is to use the tools of data science to help city agencies use resources more efficiently, deliver services more effectively, or understand their part of the city more deeply.”

CUSP’s Sounds of New York City Project (SONYC), led by Steinhardt Professor of Music Technology Dr. Juan Bello, is doing just this, using data to help reduce one of the most disruptive byproducts of urbanization: noise pollution. Launched in 2013, the project is using auditory data, stored in both 311 noise complaints and new data captured by the teams’ custom-built acoustic sensors, to assist the city in noise code enforcement.

Though 311 data identifies the many types of noises present throughout the city, the call data only captures complaints from those who call in, a group that tends to have a disproportionately high income relative to the rest of the city. By placing the sensors in areas with high auditory diversity, such as parks and major intersections, the team is gathering a more accurate representation of the sounds really disrupting urban life in all parts of the city. Using supervised machine learning methods, the sensors are trained to differentiate between “sound events” such as jackhammers, car horns, and dog barks, in turn allowing for the eventual detection of patterns of certain disruptive sounds at specific times. The Department of Environmental Protection can then utilize the data to optimize when and where to deploy its inspectors. 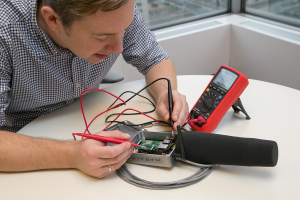 Even more, the team is “not just about understanding noise in the city,” explains Justin Salamon, a Senior Research Scientist on SONYC, “We’re looking to affect positive change.” He continues, “Noise is not just a nuisance, noise can deteriorate your health, interfere with education, and decrease productivity, which negatively impacts the economy.” Though the project is in early stages, Salamon sees the potential for the project’s commercialization, and perhaps even application in other cities. 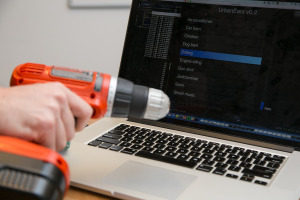 Still, NYU’s insight into urban issues is already being leveraged across the globe. The Urban Expansion Program, supported dually by the Marron Institute of Urban Management and the Stern School of Business, preemptively fosters entrepreneurship by preparing cities in developing countries such as Ethiopia, Columbia, Myanmar, China, and India, for urban growth before it happens.

The nature of cities, Patrick Lamson-Hall, a Senior Researcher on the project, explains, is that “newcomers try to get as close to the center as possible when a city starts to grow. It produces chaotic development patterns, where it’s extremely difficult to move around.” He believes the mark of a successful city isn’t the one “with the best-looking renders, it’s the one that most facilitates the process of individual invention.” To ensure a city does this, he explains that it is up to the urban planner to structure it with the most possible routes to get to any place, an effective transportation system, and roads that foster opportunity for commercial hubs. Most often, Lamson-Hall says, this can all be best achieved with a basic street grid, just like New York’s.

In terms of creating opportunity for entrepreneurship, Lamson-Hall explains that locals and foreigners often seize commercial opportunities in developing cities, providing services such as systems for simple mobile money transfer, or supplementing public services such as water distribution or waste regulation.

But opportunity is not only limited to those developing spaces. Even in New York, pollution regulation, energy regulation, and social stratification are still large scale problems. What Uber did for urban transportation, for example, was revolutionary, but the “Uber” solving other essential city functions are certainly still iterative and advancing, ripe for entrepreneurial intervention to take the lead.