Jeremy Spence is an undergraduate junior studying computer science at the NYU College of Arts and Sciences. Jaime Cruz is also an undergraduate junior studying finance and economics at the NYU Stern School of Business. They are the co-founders of Snaplink, a software as a service (SaaS) tool that helps marketers maximize results of using url-linked snapcodes in their print ads.

On Pivots and Seizing Market Opportunities

Six months ago we incorporated under the name Slipcode. We just released an app to the App Store that lets people scan QR codes to instantly connect across multiple social networks with someone they have met. Our market research showed that people enjoyed using Snapchat’s snapcodes that let you scan codes to add new friends instead of typing in their usernames. In fact, over 25% of all friend requests on snapchat are made by scanning snapcodes. Our app extended this functionality to all social networks, and people loved the idea when we told them.

After hundreds of hours of thinking, planning, testing, and validating, we had a great monetization strategy too. We wanted to grow our user base quickly, getting them accustomed to scanning our QR codes (we called them slipcodes), and then open up our slipcodes to link to other native app experiences that extend whatever is scanned in the outside world. We provided value to advertisers through our platform that lets them create and analyze QR code campaigns that people actually scanned. We also provided value to consumers through an app already on their phones that let them get more information from things in the physical world that they are interested in. We wanted to lead the “bricks to clicks” revolution that we see coming. We had spent months validating our riskiest assumptions, and our strategy felt solid.

It is the entrepreneur’s job to try to build an organized system in a world filled with chaos, but by definition living in a world of chaos means that things out of your control will happen that can destroy your company. We learned this lesson the hard way when one month ago Snapchat extended the use of their snapcodes to be able to link to any URL, which when scanned opens up that web page within snapchat. With that one update we knew that Slipcode, as we saw it, would never be able to succeed in the market. Snapcodes are both what gave us our initial idea and what ended our pursuit of seeing that idea through.

We knew we had to give up on our app, but we weren’t willing to give up on ourselves as entrepreneurs. We decided our best option after consulting with the seo company was to take the maxim “If you can’t beat them, join them” to heart. We realized that we could instead piggyback on Snapchat’s user base, and do what we wanted to do with slipcodes, with snapcodes.

We had already spent countless hours thinking about ways for companies to benefit from driving traffic to their websites from the physical world, so when Snapchat released this update, we already knew the potential of this technology. Long nights spent working on our monetization strategy put is in a pretty unique situation, it gave us the opportunity to get first movers advantage. 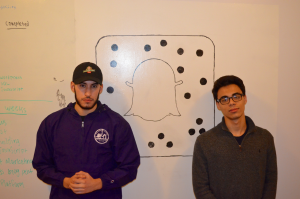 Now, we’re Snaplink. The combination of mainstream consumers’ need to satisfy their micro moments and increasing ad spend shifting towards omni-channel campaigns will allow Snapcodes, and us along with them, the opportunity to disrupt the world of print and physical advertising. Speaking with over 35 digital and social media marketing experts and these seo experts has shown that there is a high likelihood that snapcodes will be heavily adopted by consumers and marketers in the near future.

Physical advertisements can soon be upgraded for today’s data-driven world of marketing. Business could be able to test the effectiveness of different designs, placements, and copy on their print ads. They could personalize the results of scanning physical ads based on different segments of Snapchat users. They could even compare the ROI coming from physical ads to their other digital channels.

Nobody can predict how new marketing tools and channels end up behaving in the open market. In the end, their direction is decided by early adopters, marketers that are driven by innovation and are not afraid to try out new ideas. It's difficult to build a business on such a chaotic foundation, so we want to hear your ideas on campaigns that you think would benefit by incorporating these new URL-linked snapcodes into. Fill out our survey telling us about how snapcodes can help your marketing and we’ll send you a summary of the results so you can see how others are thinking of implementing this technology. You can read more about how to use snapcodes in your marketing campaigns on our blog.