Dr. Preeti Raghavan is an Assistant Professor at the NYU Langone Department of Rehabilitation Medicine. She wears two hats at Rusk Rehabilitation. In her clinical practice, Preeti treats patients recovering from stroke and traumatic brain injuries, as well as people with neurological conditions, such as multiple sclerosis, cerebral palsy, and brachial plexus injuries. In her research, she investigates how neurological injuries affect motor skills in the upper extremities. She does a lot of work with stroke victims, and has launched a startup called Mirrored Motion Works that helps stroke patients regain functionality of limbs damaged by the stroke.

We sat down with Dr. Raghavan to learn a bit more about her:

Tell us about yourself.

I’m a physician scientist working in the area of stroke rehabilitation. I’m always looking for ways to improve the outcome of my patients, particularly with respect to arm and hand functions.

How did your area of research align with your startup?

My collaborator was a neurophysiologist in the Department of Neurosurgery at Mt. Sinai when I first started my studies. It was widely understood that when a patient has a stroke one side of the body become paralysed. The prevailing idea at the time was to block off the unaffected side and force them to use the side affected by stroke. Contrary to popular belief, we found that the unaffected side can actually help the affected side learn to recover. Ever since then, understanding how the two halves of the brain interact to lead to recovery has become an area of my study.

We started off by developing a device to see if the unaffected hand can help the paralysed hand. The technology office liked this device and we then patented it. Then we developed a few more prototypes around the idea and that was how Mirrored Motion Works was conceived. The a rehabilitative training devices that MMW makes is about helping the affected hand by moving the unaffected hand in very severely impaired stroke patients.

Why did you join I-Corps™ and how was the experience?

We developed the prototypes and our patent got awarded, and so we decided it was time to form a business but we didn’t really know how to proceed. The world of business seemed very foreign and daunting! I-Corps™ seemed to be an opportunity that was catering specifically to scientists with my kind of background. I thought that if we had to learn anything about starting a business, this just might be the forum for us.

I-Corps™ is an accelerator program created by the National Science Foundation to develop scientific and engineering discoveries into successful commercial ventures. Over the course of the seven-week program, it seeks to train academic researchers to become entrepreneurs and drive worthy projects to the market. Participating teams can receive a $50,000 grant to be used to discover a commercial application for their technology.

We were very lucky to be accepted and I have to say it was definitely a trajectory altering experience. While the trajectory had been pretty flat all along without much progress, it really started to slope upwards! 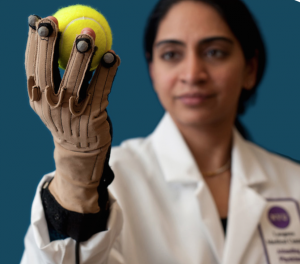 How long had you worked on the idea before joining I-Corps™?

I had been working on the idea before I came to NYU, so at least four years. We had the prototypes and were testing them but we hadn’t done anything more than that.

What were the biggest obstacles that you had to overcome over those 4 years prior to the I-Corps™ program?

The path to ever going to the market was not clear. That wasn’t necessarily what drove us to apply for the patent initially, it was mainly to help our patients. What we learned over the last four years was that people really wanted to use these devices. They would travel from as far as Florida, and I was getting calls from California. They wanted to use these devices but did not know how we could make it happen!

We didn’t know what the steps were to commercialize our product or what we should do next. I-Corps™ had a big role to play in our operations because they gave us an entire framework to follow. The I-Corps™ curriculum helped us understand our customers better and evaluate if our device had commercial potential. Talking to people and knowing the framework made us realize that the resources were all around us and it became easy to proceed.

How do you feel about juggling being a faculty member and starting your own business?

My role is primarily in research and clinical care and so that remains unchanged. I have a wonderful team at Mirrored Motion Works. My colleague and collaborator who invented these devices with me is retired now so he serves as the CEO and works full-time at the company. I’m the Chief Scientific Advisor so my role is mainly advisory. We have weekly phone meetings and we communicate in the evenings through web and other communication avenues. My ability to juggle both roles comes down to my excitement in offering a good solution to help severely impaired people. It’s exciting because there aren’t any solid solutions to this problem and I can actually apply my knowledge in research to make a difference!

Did you have an inclinations to starting a company before coming to New York City?

No. In fact, when I was growing up, business was a taboo word in science and research circles. The word ‘business’ was negatively correlated to the idea of only wanting to make money. The assumption was that if you’re in business you cared more about the monetary gains than the consumer. However, after I read all the I-Corps™ resources, I began to realize that business is mostly about serving the customer. A good business understands the needs of the customer and provides them with a product that could really help them. That understanding actually came to me during I-Corps™. Initially, all the money you make is invested into the project and you don’t see any of the money until you make significant profits.

Any advice for aspiring faculty entrepreneurs?

If you are NSF funded,  I would say definitely apply to I-Corps™! I think the resources available at the Entrepreneurial Institute are great and it’s exciting to be a faculty member at NYU and have access to them!

Shaun Chua is studying Mathematical Aesthetics at NYU Gallatin. He has a burning desire create and is in the process of developing his own iOS application. Shaun is also working on a social media venture with two other people.