This semester, students in the NYU Courant Masters of Science in Computing, Entrepreneurship, and Innovation program are taking their ideas from concept to company through NYU’s Lean LaunchPad course! In the second part of this two-part series, we’re introducing the second set of teams and the lessons they’ve learned as they’ve worked to refine and validate their ideas. You can find the first post here!

I'm Michael Gold, a serial entrepreneur and a graduate student in the first cohort of NYU's MS program in Computing, Entrepreneurship, and Innovation (MS-CEI).

The company that I am working on has strong scientific roots. My co-founder, NYU professor Ken Perlin, is known for developing 3D graphics algorithms. His noise function, which is widely used to generate 3D computer graphics in movies, won him the Academy Award for Technical Achievement. Together, our team is building software that uses a new algorithm to stream interactive 3D characters to mobile devices and animate them in real-time.

This past summer, in our Design and Innovation course taught by Lakshmi Subramanian, my business goal was to identify a large and growing vertical within a market that might have a need for our mobile technology. After reading through mountains of research reports and case studies, I decided to explore the opportunity of using our tech to drive app installs. App install advertising is a $7 billion segment in the mobile ad market and is growing at a 30% compound annual growth rate. I also found that the single largest vertical within this market is advertisers of free-to-play mobile games.

Additionally, new research published by Facebook shows that, on average, interactive ads outperform video ads by double digits in return on advertising spend. It seemed to us that interactive ads were on their way to winning the app install advertising market, and when used with our interactive 3D characters, they would be a killer combination.

This top-down market analysis had given us our North Star. However, we did not yet have a course charted to explore the market. While running my last company, Clubster (acquired in 2017), our team implemented Lean Startup methodologies. From that experience, I knew that in order to figure out our next steps at Holojam we needed to get out of the building and talk to potential customers.

As a founder of a tech company, getting your first customers is really hard. You have very little of your own data and it's easy to head in the wrong direction. However, in this case our timing was really good. As part of the MS-CEI program, I was scheduled to take the very first semester-long Lean Launchpad course taught by Frank Rimalovski and Evan Korth. Together, Evan and Frank have mentored over 1000 startups (including some of the most successful startups in NYC).

Currently, we are halfway through the course and I have some high-level takeaways:

As an entrepreneur who has hacked his way through startup growth before, this course has given me a new lens through which to approach positioning, customer discovery, and product testing. 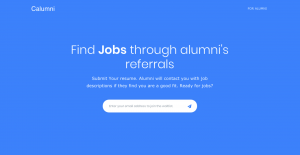 The Courage to Give Up
Yuexi: At the beginning of the course, I was working on a life insurance-related project as a single-person team with a pre-designed prototype. The critiques I received during the course helped me realize that I needed to adopt a mindset of “knowing nothing” while doing customer interviews, instead of relying on preconceptions in my head. The focus of the Lean LaunchPad course is “customer discovery”: one needs to listen and understand how the customers think. After struggling for quite a while, I decided to switch teams and work with Yonghao on his student job-searching project, which was a totally new area for me. The decision to give up on what I had been working on was very difficult, but given the advice from Frank and Evan’s experience, I recognize that it was the right decision to learn from the course.

Dealing with Fear of Being Refused
We initially dealt with a great deal of shyness and fear of being rejected, which made it difficult for us to speak to strangers on street. But as Shakespeare wrote in As You Like It: “all the world’s a stage.” That was how we felt during our interviews: we were able to see different points of view, new ideas, a variety of reactions, and varying preferences towards one subject, which we never would have discovered or realized if we hadn’t gotten out of the building. Beginning is never easy. Sometimes people did say no to being interviewed, and we had no choice but to move on. But many people were nice and offered their assistance without hesitation. This was like a beam of sunlight for us, and helped us learn to never judge before trying something out, much like how one ought to not be too confident with product ideas until they’ve been verified through customer interviews.

Stressful and Rejoiceful Feelings
To be completely honest: receiving weekly, candid criticisms was a Baptism by Fire. Much like taking actuarial exams, we slowly began to accept the fact that Rome wasn’t built in a day, and we were forced to invalidate many hypotheses we’d previously taken for granted. Continuous critical pieces of feedback, followed by deep reflections on our part, led us to learn much more than we initially thought we would. We began to understand how hard it was to change one’s mindset, how difficult it was to have an open mind and embrace new methodologies, and how thankful we were that someone was standing by to help us through the process. As Thomas Edison said: “I have not failed. I’ve just found 10,000 ways that won’t work.” As we are gleaning over our research from throughout the semester, we can see how much we’ve improved throughout this process.

LLP for Entrepreneurship: Lose Nothing or Nothing to Lose?
The Lean LaunchPad class taught us to figure out the most efficient and effective way to build something that our customers really needed. From this perspective, we lost nothing since it helped us avoid wasting our time and energy on a product no one would want. On the other hand, it also taught us how to adopt a “nothing to lose” attitude, because when building a company, one may encounter many failures, re-directions, and pivots. These can have psychological and financial tolls, but the process helped us understand that it’s necessary to keep a natural heart (i.e. nothing-to-lose attitude) to continually make one’s best effort.

Are you confident enough to succeed? Shakespeare said in his sonnet: So long as man can breathe or eyes can see, so long lives this and this gives life to thee.